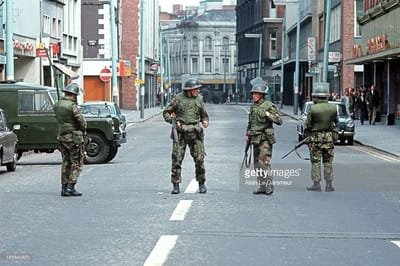 1969, and there's a war going on. People being shot and bombs going off.
But the bombs are not above and there's no shelters in to run.
As with many, far too many, this is a war of religion.
The two hundred year old differences of Catholics and Protestants
are not for the first time, at boiling point.

Into this turmoil on the fourteenth of August, the army are sent in.
Young men try to fathom, a world where cross religion romance, is betrayal.
And speaking out of turn means a bullet in a knee-cap, or worse.

Walking the streets, always on display.
Our visibility is comfort for some, and target practice for others.
Our flak jackets weigh us down and provide limited protection.

The enemy rarely wears uniform and easily melts away.
Our lives on the line every step of the way.
But no complaints from us, we knew what we were signing up for.

On return we get a medal. No presentation or thanks, just, sign here son.
And no dawdling in the corridors on your way back to work.
But there's no medal for many, they never come home.

Thirty odd years later and there is talk of a peace. The fragile truce though
comes at quite a cost.
The gates of the prisons open and 428 prisoners walk free.
Mass killers, bombers, former lifers, they all go home.

2003, and there's a storm brewing over in Iraq.
We're already busy in Afghanistan, so there's not much time for planning.
Just get yourselves out there and sort out Saddam.

Technology's improved, body armour has really come on.
But despite regular long gun battles, there is not the time
to get everyone this potentiality life saving kit.

And forty seven years on, one man previously recognised
for gallant or meritorious action in the face of the enemy.
Now faces six charges, including that of murder.